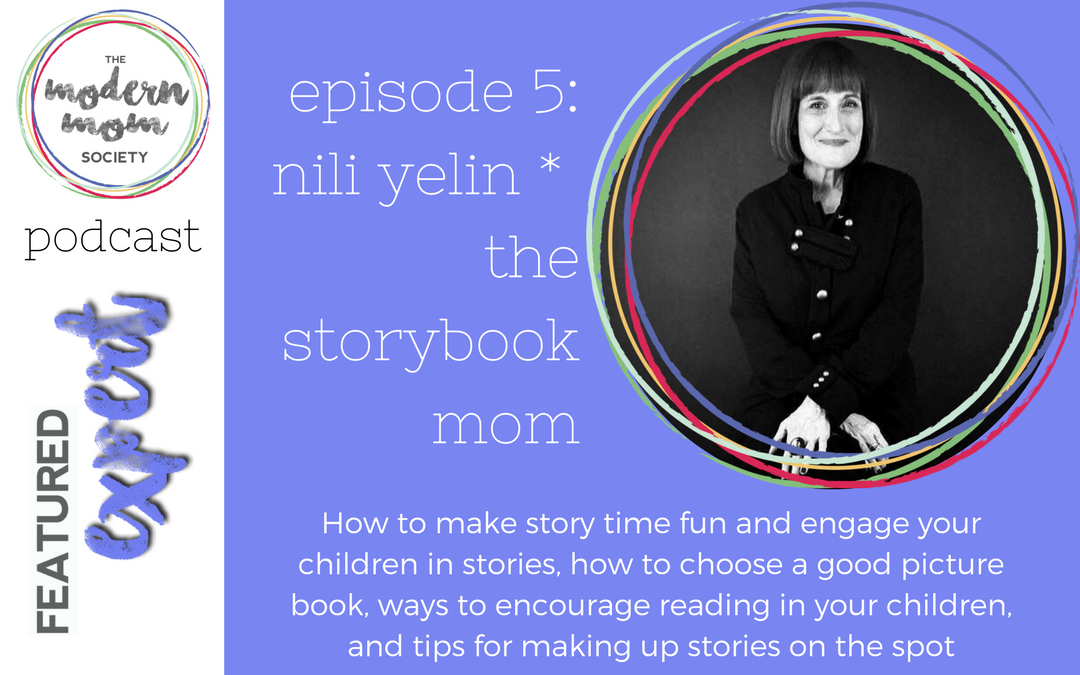 In Nili Yelin’s interview we discuss:

Listen below or subscribe in iTunes, Stitcher, or Google Play!

What would you tell an expecting mom about the experience of being a mother?

Best thing ever, you will find deep resources within yourself and feel more love than you knew possible. Sleep when you can and ask for support whenever needed.

What is the hardest part about being a mom? Biggest frustrations?

Lack of sleep and constant interruptions…

What is your favorite part about being a mom? What makes all the hard stuff worth it?

Award-winning Nili Yelin has combined her professional theatre career with mommyhood to create The Storybook Mom. Using an interactive, educational and highly amusing style, Ms. Yelin likes to call her story-telling, “Sit Down Stand-up.” She delivers a full performance of the written word, even though the words are few, rhyming, and surrounded by pictures.

Along with her many weekly storytimes, Yelin regularly hosts the annual Chicago Tribune Printers Row Lit Fest Children's Stage. She story-tells for the Field Museum and their podcasts for children in association with The Crown Family Play Lab, The Shedd Aquarium, Museum of Science and Industry, and various venues around Chicago and the suburbs. Yelin has expressed the lofty goal of having “every kid in Chicago know their ABC’s backwards before they enter preschool.”
Ms. Yelin’s outreach includes after-school programs with the Chicago Mayor's office, homeless shelters and domestic violence centers; The Center for Companies That Care on their corporate literacy initiative, Terrific Tales, performing in schools and libraries on Chicago’s South Side; Bernie's Book Bank, a not-for-profit organization that collects and distributes books to low income schools; and Creatively Caring and Sunrise Homes, storytelling for children with autism and special needs and older people with dementia.
After graduating in Theatre from Northwestern University, Ms. Yelin wrote and performed for MTV Networks and then for Saturday Night Live. She is also a voice-over talent. Today Yelin is the Chicago Ambassador for World Read Aloud Day presented by LitWorld.org, furthering global literacy.
Yelin has appeared on WGN TV News and in numerous magazines, newspapers, websites and blogs. Awarded "Best Storyteller" by Make It Better Magazine, Chicago Tribune and Time Out Chicago Magazine.

This site uses Akismet to reduce spam. Learn how your comment data is processed.

You have Successfully Subscribed!

We value your privacy and will never spam you!
Connect with Modern Mom Society experts and other real moms!